Grudging Praise for The Book of Eating

“If you can, try to accompany Adam Platt on one of his culinary adventures— not just for the food but also for his nonstop, hilarious, orotund commentary. If you can’t get an invite to dinner with Mr. Platt, by all means read The Book of Eating. It’s a marvelous memoir, almost as good as dining with the master himself.” Malcolm Gladwell

“…[An] entertaining and honest account of restaurant journalism, and a life worth exploring.” Booklist
“Adam Platt draws you into the strange, captivating, surprisingly punishing life of a restaurant reviewer. It’s a job you can’t train for—you bring to it the life you’ve led—and Platt’s wildly unusual and gastronomically adventuresome upbringing gave him a decided edge. His enthusiasm for eating and his candid self-doubt make The Book of Eating a supremely engaging portrait of a professional eater.” Amanda Hesser

“Mark Twain famously said never to pick a fight with people who buy ink by the barrel, and so I have only this to say: Adam Platt is as brilliant as he is disagreeable, and at least as funny as he is grumpy. Please buy The Book of Eating: Adventures in Professional Gluttony so that Platt can just retire and leave us restaurateurs alone once and for all.” Danny Meyer

“A candid, entertaining look at an often bizarre new gustatory landscape.” Kirkus Reviews
“Adam Platt has written one of the tastiest social and personal histories I’ve ever feasted upon. Witty, smart, and entirely unpretentious, he is the wingman who will accompany you from a simple diner BLT to the foodie temples of Tokyo. I put on five pounds since I finished The Book of Eating and each one of them has Adam Platt’s name on it.” New York Times bestselling author of Lake Success and Little Failure Gary Shteyngart

“A timely and delectable smorgasbord of dishes and dishing … this honest, revealing and funny book is as deeply pleasurable as the soup dumplings Platt learned to love as a boy.”

“It is the dream of every restaurateur in town to kick Adam Platt out of one of their restaurants.” Mario Carbone

“Gastronomes and fans of Platt will savor this behind-the-scenes look at real life as a restaurant critic in the big city.” Publishers Weekly
“Adam Platt is one of America’s most beloved food critics and this book will tell you why. A fascinating and fun account of a life well traveled, well fed, and well lived. A great read.” Padma Lakshmi

New York Times bestselling author of Love, Loss, and What We Ate 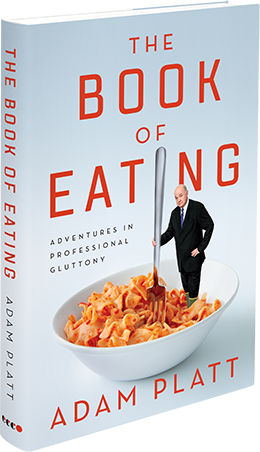 The Book of Eating

As the son of a diplomat growing up in places like Hong Kong, Taiwan, and Japan, Adam Platt didn’t have the chance to become a picky eater. Living, traveling, and eating in some of the most far-flung locations around the world, he developed an eclectic palate and a nuanced understanding of cultures and cuisines that led to some revelations which would prove important in his future career as a food critic. In Tokyo, for instance—“a kind of paradise for nose-to-tail cooking”—he learned that “if you’re interested in telling a story, a hair-raisingly bad meal is much better than a good one.”

From dim sum in Hong Kong to giant platters of Peking duck in Beijing, fresh-baked croissants in Paris and pierogi on the snowy streets of Moscow, Platt takes us around the world, re-tracing the steps of a unique, and lifelong, culinary education. Providing a glimpse into a life that has intertwined food and travel in exciting and unexpected ways, The Book of Eating is a delightful and sumptuous trip that is also the culinary coming-of-age of a voracious eater and his eventual ascension to become, as he puts it, “a professional glutton.”